skip to main | skip to sidebar


We were sad to say goodbye to Cradle Mount 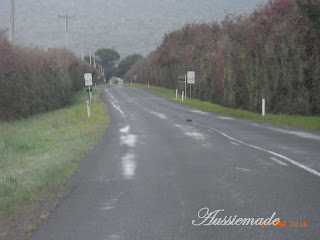 ain and begin our journey home.  We had decided to take our time on the trip home, and as we had to be in Hobart for a family get together (grand daughters 7th birthday) we felt rather than get home from our holiday after a long drive and have to do another 200kms we would stay overnight in a lovely village called Oatlands.  This little village has the most Georgian buildings in Australia, according to the tourist information.  We came home through Mole Creek and went for a walk along this beautiful rural towns main long street.  Chatting with some ladies in a community shop, we discovered that there is a beautiful creek 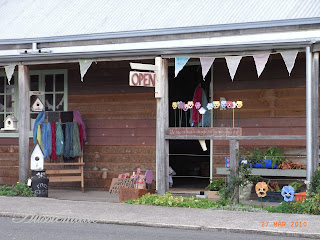 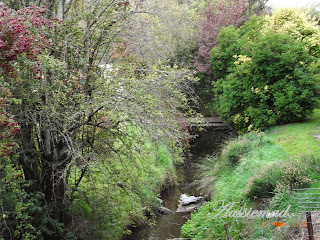 and gardens behind the Hotel and shop.
Not only that but it is home to platypus.  Now we were lucky to see not one but two platypuses swimming and digging for bugs. Sadly I was to noisy trying to take a photo of one that was fully out of the water a 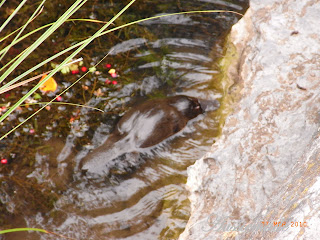 nd frightened it back in.  However did get some okay shots. 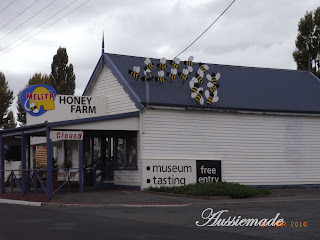 I wanted to try their honey but they were closed. It was Sunday
Seems they are only open M-F.  Oh well. 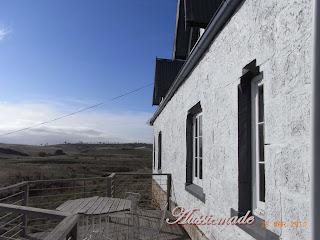 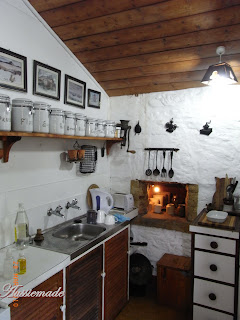 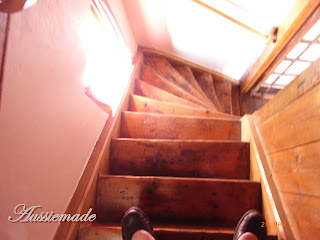 These were the incredibly steep stairs from the top floor which fortunately we did  not have to use, except to have a look at.  I can not imagine how I would have managed if I had to go to the loo in the middle of the night.
The kitchen was bigger than ours at home, and how
I would have loved a brick oven like the one where the
light is shining.  It was not being used 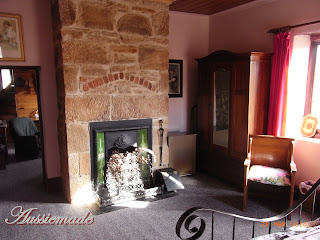 It is strange but both my DH and I said it was fine for one night but we did not feel that we would have enjoyed staying for two.  Perhaps to many sad and hard times held in the walls.  We had a similar experience when we stayed in an old church school that had been converted into a Self catered  cottage.  We both felt an overwhelming sense of relief when we left after two nights.  Just wonder at what happened to the children. May have been a very harsh school.
It is always wonderful to have a few days away, but oh I love picking up the dog and cat, driving the last 20kms of our trip along the river and through the winding narrow road away from traffic, and turning into our drive way.  At times I do wonder why we have a need to leave home and go anywhere else really.
.
Posted by Aussiemade at 08:55 2 comments:

We have recently returned from another wonderful trip and yes this time I took our camera.
This is Mount Roland on the drive to Cradle Mountain. 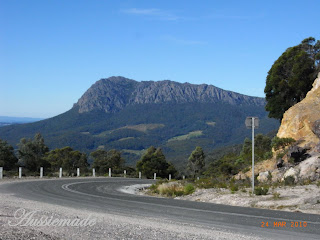 We were driving climbing up the the hills from Mole Creek to Cradle Mountain when I spotted this wee little Echidna on the side of the road. 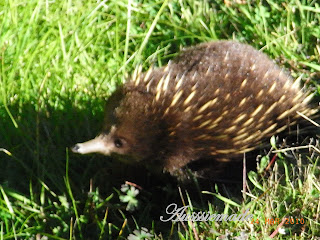 It is about 5 hours drive from our place.  We stayed in a very well appointed self contained and environmental ish house in Moina called Casa Verde. Below are part of the gardens at Casa Verde. 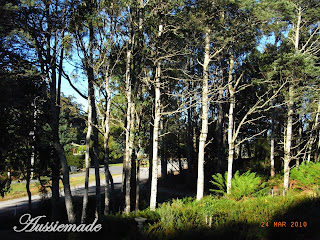 I took two frozen prepared meals from home, just required some pasta to be cooked and heated.  I had grated cheese, and bought fresh bread. 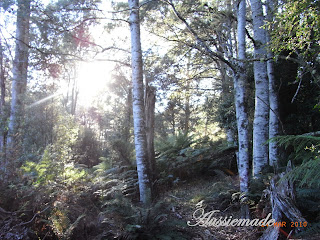 The house was wonderfully insulated and well appointed with lots of interesting books(from my perspective) and great selection of DVD's.
I took two frozen prepared meals from home, just required some pasta to be cooked and heated.  I had grated cheese, and bought fresh bread. So easy, we had space, quietness, cosy warm fire no TV no Radio.  We did watch a DVD or two, after our lovely days out. Mostly we read, and chatted.
We had one meal there which was very tasty and relatively well priced for being in a remote and tourist region in the high season. Moina is about 20mins drive from The Cradle Mountain National Park. Having a place to ourselves was want we needed and so the drive was not difficult, though in winter I would stay at Cradle Mountain.

This is a replica of the first house built in the Cradle Mountain area, the original was burnt.  A chap called Waltheim walked in loved the area and built a house.  He married and they lived up in this incrediblely remote wilderness.  He opened his home up to mountain climbers and they had many visitors. 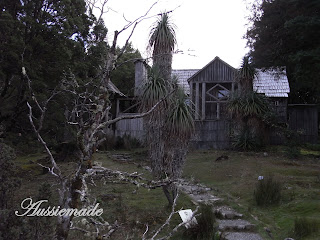 This is my photo of the first day we went to the Mountain and National Park.  The view is over Dove Lake and the Boat house in the foreground. 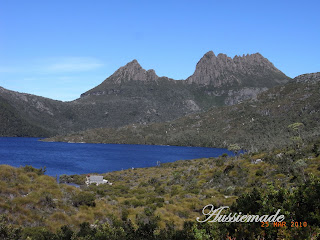 I was lucky to get photos with no one else in the photo.  It is a very popular tourist destination.  In saying that it is fairly easy to get away from people.  Just go for a walk be it an hour or two or for several days.  This National Park is pretty amazing..ahh but aren't they all!  Something positive we humans have done is to tie up these amazing places.
DH and I did a short walk as he was not up to walking far at Dove Lake as almost every direction was up a bit of a hill.  We did get to the top of the first hill and were able to look back over the Boat House. 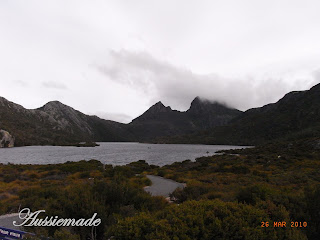 The following day well totally different story!  Rain, cold and windy. It was too cold for us to move from the car park.   As you can compare from the photograph above.  Day 1:   25C degrees wonderful  Day 2 13C degrees brrrr. 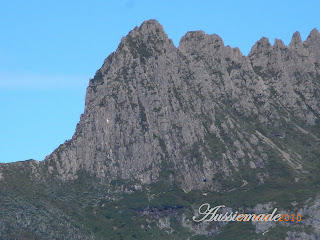 
We did a 500metre walk in a the National Park, it was a gentle walk and very pretty..  with waterfalls and lots of bird life. There had been strong winds over recent times and quite a few big old trees had fallen.  It has also been very dry up in the Cradle Mountain National Park over the last few years, so tree roots are loose.  When you have winds of 150km/hr+ coming through regularly, I tend to wonder that any big trees survive at all up here. 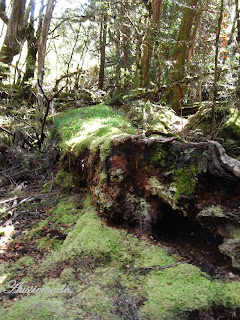 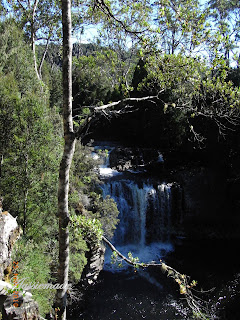 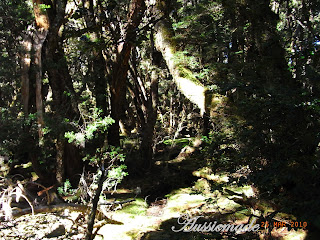 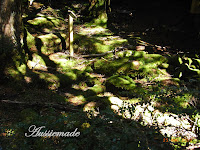 The trees may fall and change this walk, which we have done several times in the past.  It does not change the feel of this walk. I love nature as even if you have seent the same thing everyday it is always slightly different. 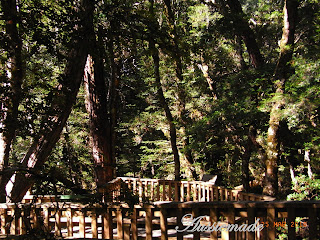 My darling man loves mountains, any mountains.  He has climbed Cradle Mountain, many other mountains and walks in Tasmania, Malaysia, UK, Switzerland and he has climbed Kilamanjaro.  His spirit was revitalised and he felt a sense of wholeness.  I dont know why we have not been up earlier before he became sick.  Dont put off any thing that gives you peace, joy or are passionate about.

There were some bonuses however to being in the National Park on the cooler day.  We saw another Echidna.  This one was so not interested in us, just mosseying along doing his/her thing. 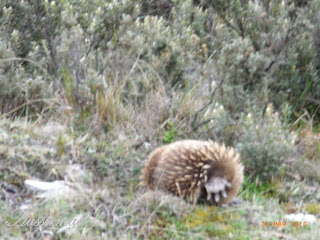 I have never seen an Echidna's foot before lol he/she was having a scratch. 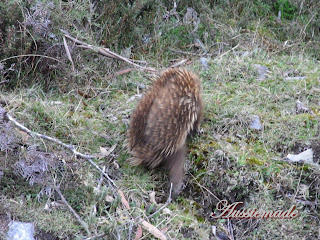 They can move pretty darn quick and I was in the car driving (well I had stopped) and trying to take photos.  If I had jumped out I think I would have missed this little guy completely.

Cradle Mountain is the beginning of one of the great walks in the world.  The Overland Track.  5-7day work in some really amazing land. I have never done it, but several friends have had amazing treks.  This photo shows the beginning of this walk from Cradle 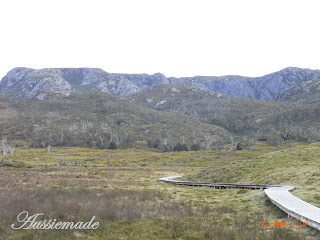 to Lake St Claire.  It has become so popular that our state government now make you book your walk so not too many people are out there at once.  It was getting too busy in summer.  It is a shame in my mind how we love our natural areas so much we are so at risk of spoiling them.

It is also here that you can see many wombats in the early evening coming out from their burrows to eat.  I had forgotten that Wombats have pouches that the baby when small is in a pouch. I think the one below is to big to be in a pouch now. 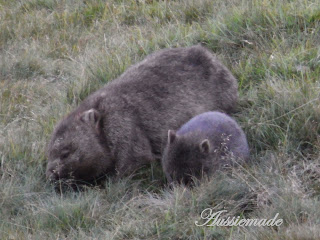 In the National Park I saw several wombats. I was blown away by just how ignorant and silly some folk are.  Here is this amazing animal, with her baby, eating and being natural. These people see them, begin to race towards them yelling at each other,...come on come on...racing over the alpine grasses, some of which if damaged can take 30years to regenerate. 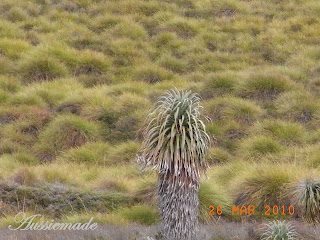 Taking photos, and scarring the wombats so that mother and baby ran away. Weird that!
I and a couple of others waited patiently and relatively quietly and the mother and baby came quite close about 10 m from us, not frightened and just ate the grass.

As I was walking back along the duck boards, I spotted this not so little guy.  He was right at the edge of the boards.  I could have reached down and patted him.  I must have watched his antics for 20 minutes.  He scratched, nibbled grass, dug roots. Stretched and scratched again.  Wombats have poor vision but good smell (at least that was what I was taught) so he knew I was there.  He looks as if he is loosing his summer fur and growing in his winter fur..he will need it up here. 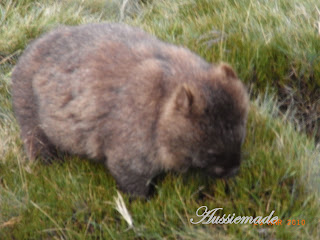 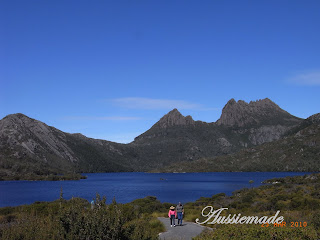 It was very sad to say Goodbye to Cradle Mountain but how very glad we were to see it like this together one more time.  I feel perhaps that is one thing when someone has a terminal disease you make the time to do the things you should be doing more off. We laughed and enjoyed every experience whilst DH was unable to do the walk to see the wombats, he enjoys the videos I shot. We just do things now and enjoy them as much as we can...
Posted by Aussiemade at 09:46 8 comments:

Aussiemade
Tasmania, Australia
I love where we live. The beautiful island state of Australia, Tasmania. I aim to produce much of the vegetables, herbs, and fruit that we eat. I also aim to make most of the gifts we give. I use organic principles and try to minimise as best the foot print we are leaving for the future. I love to cook,with home grown or with local fresh ingredients that are seasonal. I am a huge fan of the slow food movement, grow your own, and seasonal cooking. I love to share with people. Having a laugh is important to me. Life is to short for holding onto negatives. In fact life is to short to not have fun, laugh and chase your dreams. Our life is about the simple pleasures watching sea eagles soar, the river, the sunset. The birds, frogs and bugs that abound in our garden. Simple pleasures that we have created, our home a sanctuary. I have contentment, joy and a very good life! I am very aware that not all people experience what I have, and this saddens my heart. We are so fortunate to live in a place that is free, safe and rich!

Please note that all photographs on this blog are my own and are owned by me. Please do not copy or use them without my permission.

The views expressed on this blog are mine, unless otherwise noted and I will always endeavor to acknowledge the source. One exception may be with recipes, as some of these as any decent cook knows come down through family and friends.
If I know where the recipe comes from I will provide the source.